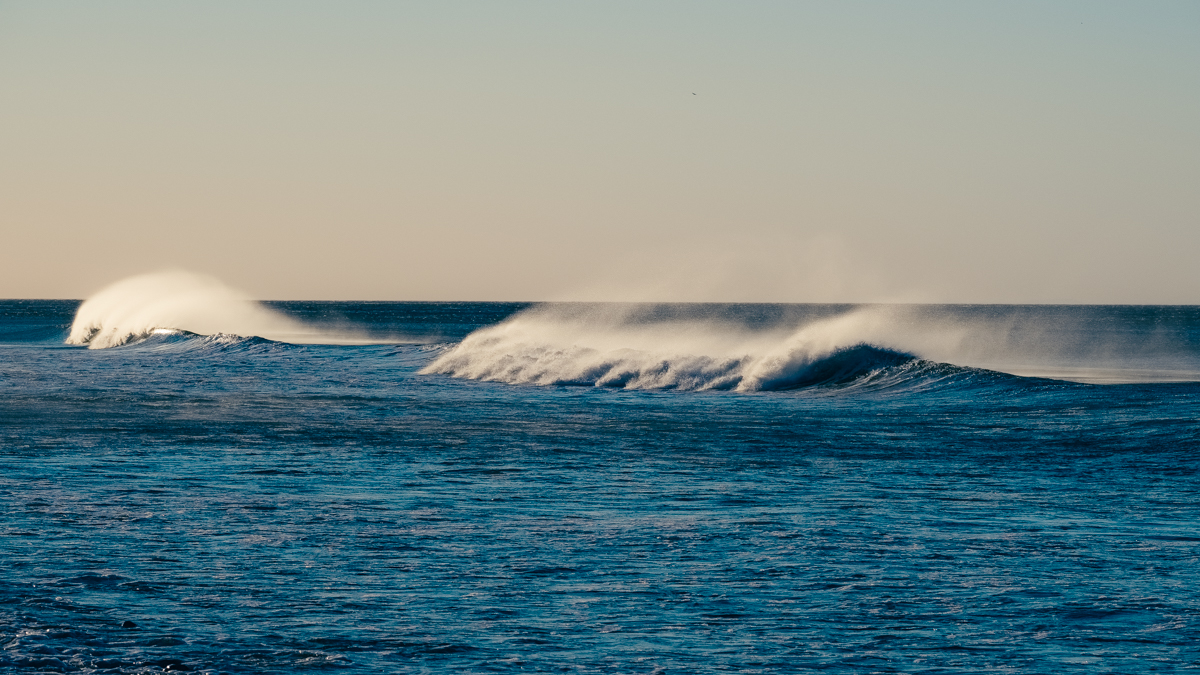 Whenever I take photographs of certain waves, I think I get possessed by the same demon as Katsushika Hokusai (1760 – 1849), the Japanese artist who authored iconic print such as The Great Wave off Kanagawa. In case you were still not sure, this post is about waves.

Last Sunday, I was at La Jolla Beach, in Malibu, shortly after dawn. To tell the truth, I was there at 7 AM which is way past dawn. Anne-Claire was running there with her trail running club. Although I sometimes try to hurry my sedentary body up and down the trails surrounding Los Angeles with uneven results (mostly poor), I am really grateful to her hobby because it makes us be into the wild in the very early morning. We are morning people, we go to bed at 9 and wake up at 5. Sleeping nine to five, what a way to make a living, right? If you see a photo of mine shot at night, it’s likelier to be early morning than late night.

We left Redondo at a quarter to six, because the Ray Miller trailhead (the end of the Backbone Trail that crosses the Santa Monica Mountains) is one of the furthest from us: it takes more than an hour to get there if there’s no traffic. As soon as we drove past Malibu I started feeling gusts of wind tugging at the car. That was a little disheartening. I like comfort. I like mild temperatures, gentle breezes, pastel lighting. I am also aware that no guts no glory, that the faint heart never won the fair lady, and so on and so forth. We got to the trailhead, parked the Mustang on PCH because the gates of the parking area open at eight (that is so late). Anne-Claire went running, I bundled up in my winter jacket, pulled the hoodie up, and hesitantly headed to the beach. The beach was very happy to see me and started sandblasting my bare calves con gusto as soon as I approached the shore. Little did I know that the wind was just excited and wanted to hurry me to an unspeakable marvel.

The beach was empty, a fisherman and I were the only spectators to the display of wonder that every wave would perform. They were not solo dance acts: each wave would find a partner in the wind that was rushing down to meet them from the Santa Monica Mountains. Splash splash woosh woosh.

Each wave seemed under a different spell, each crest a bejeweled crown of fractal delights. I must have spent at least half an hour just collecting waves.

You know how these things work: you think you hit the ceiling of beauty, and a new wonder unfolds before your eyes. The Sun must have head about the waltz that the wind and the waves were dancing, and decided he wanted to come and have a peek.

A peek was all the Sun needed to decide he wanted to join the dance too. And that’s when the wonder stepped up to the very next level. The crests were not anymore the the foamy fins of giant fishes, but they became like golden flares, exploding from the surface to dissolve soon after back into the Ocean.

What was happening on the beach was not less delightful: I just had to pick the scale, the distance where my eyes and lens would wander, and I was in a little heaven of water, salt, sand, rocks, and sunshine.

My original plan was to remain on the beach for a few hours, but you know, the spectacle of beauty changes hearts, and it made mine stronger. I moved the car inside the parking area, grabbed my hiking pole and started walking up the trail. Twice the wind wailed and blew dust in my overly sensitive and delicate blue eyes, and twice I turned back, walked a few steps towards the parking, stopped, sighed, and started walking up again. I must have hiked a couple miles, till the where the Backbone trail bifurcates into the Overlook trail.

This astonishingly Mediterranean trail winds and turns and keeps you marveling at how much this looks like Greece, until you get to a plateau from which you spy a view that is not Mediterranean at all, quite the opposite: to the East, the Boney Mountain Ridge elevates in all of its humbling majesty. It is a legitimate Western vista that situates you where you actually are. It reminds you that you are in California. You are at the much-sought prize of a Westward movement that unravelled through this Country for more than two centuries, shaping it at the very same time. You are standing at the end of the trail.

I actually jogged my way down because I was really hungry and lunchtime was approaching. Little bonus, on the way home we pulled over at one of the viewpoints of Malibu. It does not matter what you think about actually visiting Malibu, when you see it from up there, you can’t deny that God must have been in a jolly good mood on the day he made Malibu. I say it every time and it never gets old.